Yellowstone Loop: 9 Stops You Must Make on an Epic Western Road Trip

Skiing down the slopes on a winter day at Purgatory Resort

A leisurely paddle while enjoying the sights on Lemon Reservoir

Bird’s-eye mountain view looking over the town of Durango

Where the American West comes to life

In the “Four Corners” region where Colorado meets Utah, Arizona and New Mexico, Durango offers a world of vacations in one destination. Travel the Old West on a 140-year-old steam train. Discover Pueblo Indian history in ancient cliff dwellings. Pack in adventures on the rivers, mountain peaks and ski slopes. Explore ghost towns and quaint hamlets on one of the most scenic highways in the USA. The region is steeped in Southwestern culture that you’ll see in the art and history, feel in the weather and ambience, and taste in the food and drink.


Out in the Old West

Durango is home of the Durango & Silverton Narrow Gauge Railroad, known around the world as one of the most scenic North American train journeys. Relive the sights and sounds of yesterday with a spectacular ride aboard a historic, coal-fired, steam-powered train that has been in operation since 1882. As the train winds through breathtaking canyons in the remote wilderness of the 728,000-hectare San Juan National Forest, you’ll experience the wilds of Colorado like the original miners and pioneers encountered. Along the Million Dollar Highway, originally built in 1883, discover the ghost town of Animas Fork and the old silver-mining town of Silverton, a National Historic Landmark District.

Situated in the hills 56 kilometers west of Durango, Mesa Verde Country is the archaeological center of the USA. At Mesa Verde National Park, a UNESCO World Heritage Site, see some of the most well-preserved cliff dwellings of the Ancestral Puebloans. Other notable places to see prehistoric, native archaeology include the Ute Mountain Tribal Park, Hovenweep National Monument, the Anasazi Heritage Center, Crow Canyon Archaeological Center, Canyons of the Ancients and Chimney Rock National Monument. On the Fort Lewis College campus, the Center of Southwest Studies displays colorful Navajo and Pueblo art, handicrafts and artifacts.

Durango is a wonderland for outdoor enthusiasts. Whitewater rafting and kayaking on the Animas River ranges from tame to wild. At Vallecito Lake, which is 30 kilometers from Durango, enjoy hiking, fishing, boating, hunting and camping. The Weminuche Wilderness in the San Juan National Forest is the largest wilderness area in the state. It boasts three “Fourteeners,” mountains that exceed 14,000 feet (4,267 meters), and abundant outdoor adventures, including mountain biking, hiking, horseback riding, fishing, rock climbing and camping. In the winter, Colorado’s famous powder attracts skiers and snowboarders to Purgatory Resort. The resort’s amenities include accommodations, dining, shopping and nightlife.

Downtown Durango, which is on the National Register of Historic Districts, overflows with historic hotels, such as the Strater, Rochester and General Palmer, in addition to restaurants, art galleries and boutique shopping. Festivals, live music and special events are held year-round and add a festive vibe. Craft beer drinkers can grab a cold one at Carver Brewing or Steamworks Brewing. Indulge in fine dining in an Old West atmosphere at the Ore House or enjoy mouthwatering Southwestern flavors at Zia Taqueria. Don’t forget to stop at the Diamond Belle Saloon, revered as one of the most famous original ragtime piano bars in the Wild West, and the El Moro Spirits & Tavern, site of “Durango’s Strangest Shootout” in 1906 between the sheriff and the city marshal.

We inspire tourists to visit and work with the travel industry to promote this destination worldwide.
For general inquiries and travel information:
Send email
Phone:
970-247-3500
Web:
https://www.durango.org/contact/

Room 222 at the Strater Hotel is known as the "Louis L'Amour Room" after the famous Western author who wrote many novels there.

The San Juan Skyway, which features a stretch called Million Dollar Highway between Durango and Ouray, is considered one of the USA’s most scenic drives.

Canyons of the Ancients

Pagosa Springs: An Abundance of Adventure

Ouray, Colorado: Escaping to the Switzerland of the USA

Where to See the Great Outdoors on Native American Land

How to See 5 Landscapes of Iconic Western Movies

An Insider’s Guide to Monument Valley

Getting the Shot: Mountain Biking in Moab, Utah

Getting the Shot: Climbing the Penguins in Arches National Park

A Weekend in Santa Fe 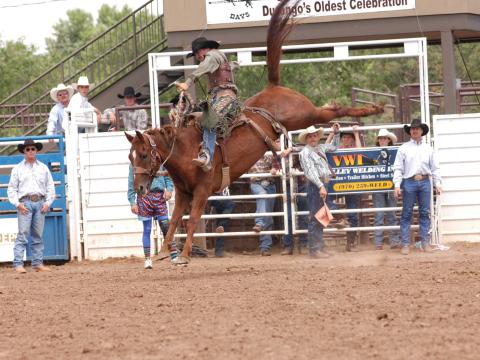